Bihar elections will have five-phase Assembly elections between October 12 and November 5 and the counting of votes will take place on November 8.

Chief Election Commissioner Nasim Zaidi said on Wednesday that polls to the 243-seat Assembly would be held on October 12, 16, 28, November 1 and 5.

The term of the current Assembly expires on November 29. 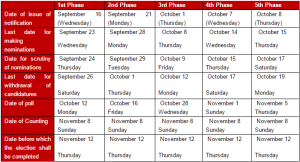 Here are the highlights of the announcement:

Delta Plus: A New Variant Of Corona Virus

ECONOMICAL AND MEDICINAL VALUE OF BAMBOO

Encryption Software To Protect Your Files