Artificial intelligence is on the rise both in the business world as well as in the real world. We are more fortunate to live in the era of technological advancements. Twenty years back, all the functions were carried out by humans and works were implemented manually. Everything has changed now, and machines have taken over the humans in most of the forms of life. With regard to automation, artificial intelligence has a special part to play with. Our lives have changed through AI, and in fact, it has become an important part of our daily lives. But what exactly is artificial intelligence. 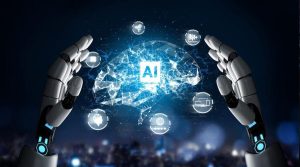 What is Artificial Intelligence – An Overview-

The concept of artificial intelligence has changed over a time. However, the core still remains the same. Artificial intelligence is the stimulation of human intelligence in machines. It is a well-known fact that humans are the most intelligent creatures on the earth. Apparently, the goal of AI is to function individually and independently similar to humans. They can dramatically improve technology in our homes and workplaces.

For instance, the current smart speaker Alexa communicate with the humans through voice recognition and respond to your queries. However, the future Alexa through AI will alert you about your forgotten keys or wallet before you leave the house. It can make Alexa think independently and act intelligently.

The introduction of AI brings the idea of the error-free world, and it is a great help for humans. Perhaps, the most exciting field in robotics. Everyone aware that robot works as per commands and are not intelligent. Apparently, with loads of progress in artificial intelligence, roboticists are trying to achieve this milestone effort. As a result of this, robots were devised. Kismet, a humanoid robot can recognize human body language and voice inflection and respond accurately.

There are several kinds of researches conducted in the field of mobility mechanisms, estimation theory, language interfaces to devise a relationship between human and machine. This led to the invention of the first robot CIMON, designed based on artificial intelligence to fly to space. This is the first AI robot, flying to space since no AI equipment has flown to space so far.

While much of this technology is fairly fundamental at present, yet we can expect significant changes in the future. You can hear constant news about yet another AI machine overcoming unprecedented hurdles and outperforming humans. Some of the ways it will impact our lives are

You might be aware that some of the applications that you already use like the Netflix, Spotify and Siri work on the concept of artificial intelligence. The human-like capabilities make them unique. Also, an advanced algorithm makes them work error free with high accuracy and higher speed. AI uses programming languages to bring maximum benefits to people’s lives. Some of its achievement so far is auto-pilots for self-driving cars and other development projects. Some of the top applications of artificial intelligence are-

Transportation – When people think about self-driving cars, the immediate picture that comes into our minds is the automatic vehicle with no drivers involved. The idea of a driverless vehicle rolling around the streets is really incredible. Although the early version of automated cars had automated cruise control, now the AI is trying to make everything inside the car fully-automated with complete safety to the passengers.

AI in Healthcare – AI, and Robotics are redrawing healthcare landscapes. One of the main areas that AI has the most impact in the field of healthcare is the AI-assisted robotic surgery. These robots will have the ability to suggest new surgical techniques based on surgical experiences.  A medical survey reveals that AI-assisted robotic surgery resulted in reduced surgical complications compared to the surgery performed without the AI aid.

Artificial intelligence sometimes called machine intelligence, when the characteristics are attributed by machines rather than human and animal thinking and displaying intelligence. Some of the typical difference between them is

Can We Create Artificial Intelligence?

It is not recommended to create an artificial intelligence with the current approach followed now. Although, AI has the potential to replace humans at all jobs and save from the slavery of manual labour, yet it can shake many societal foundations. Moreover, the human brain is composed of millions of neurons that are responsible for human intelligence, so creating a machine that could perform the functionalities of millions of neurons is quite impossible, and it is not an easy piece of cake to create AI.

AI has a consistent success since 1950 and one of the highest demanding fields. Organizationsprefergraduates having masters in AI because of their training both in computers and social parts. Studying in the best schools like Carnegie Mellon University, Massachusetts Institute of Technology can make yourself lead in the revolution.

You can also do self-study with the aid of the best books on artificial intelligence or do courses like CS188 to get ideas and techniques underlying the design of the intelligent computer systems.

Did You Know About The History Of Litti Chokha?

Is Kriti Sanon Shifting To House Of Amitabh Bachchan?

Surprise To Know About The Pronunciation Of Ghoti